Definition – Autosomal dominant, hereditary clotting disorder arising from a deficiency in the quantity and/or quality of von Willebrand factor (vWF), which is a protein required for protein adhesion and involved in primary hemostasis.  The genetic defect responsible for vWF production the vWF gene located on the short arm p of chromosome 12 (12p13.2).

Clinical Significance – This is the most common type of hereditary blood-clotting disorder in humans, with 3 main hereditary types and multiple subtypes.  Type 1 is the most common and often asymptomatic, Type 2 can have mild to moderate symptoms, Type 3 is the most severe and can manifest with hemarthosis and internal bleeding.

History – Named after Erik Adolf von Willebrand (1870-1949), a Finnish physician graduating from the University of Helsinki 1896, and who took a special interest in hematology and coagulation.  In 1924, a 5yo girl was brought to him due to a bleeding disorder and he successfully performed a family history map on the girl’s 66 living family members and discovered the autosomal dominant pattern.  He published his findings in 1926 in Swedish calling it “pseudo-hemophilia”, but it wasn’t until 1931 (when it was translated into German) did it gain any traction in the medical community. 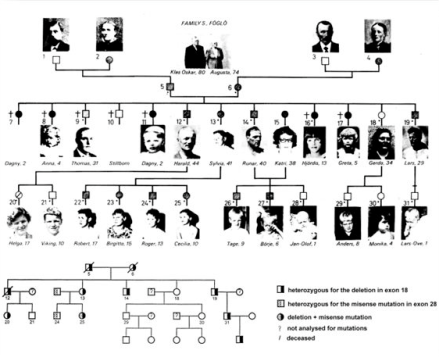 #ThrowbackThursday to my review of obstetrical screenings.
#WednesdayWisdom #BlackHistoryMonth