Avascular Necrosis of The Hip

Current thoughts on exact mechanisms are an area of hot debate, but include:

80% of all atraumatic cases of AVN are due to:

Trauma can also predispose patients to develop AVN and most commonly associated with:

Other atraumatic causes of AVN include sickle cell disease, Gaucher disease, decompression disease, treatment for ALL, and transplantation

In 1993, The Association of Research Circulation Osseous (ARCO) staging system for AVN was developed to unify descriptions for treatment and research purposes.

The goal of treatment is to preserve the native joint for as long as possible.

The most common clinical presentation of SCFE are pain and altered gait, but can be divided into four presentation patterns:

Most SCFE are diagnosed by plain radiography and have characteristic findings on each view:

2 ways to grade severity: Displacement of femoral neck or Angle of Southwick. 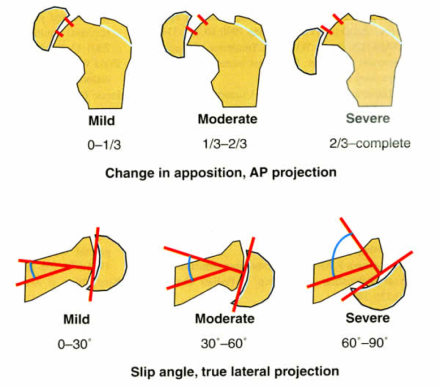 All SCFEs must be repaired surgically and the goals of surgery are to stabilize the diseased physis to prevent further slippage and avoid complications (AVN).  Treatment of choice is a single cannulated screw placed in the center of the epiphysis.