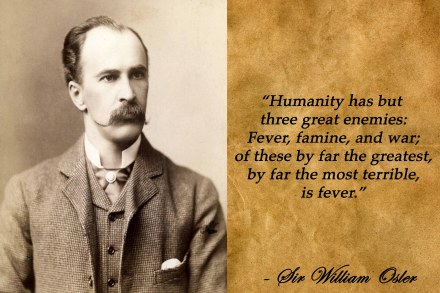 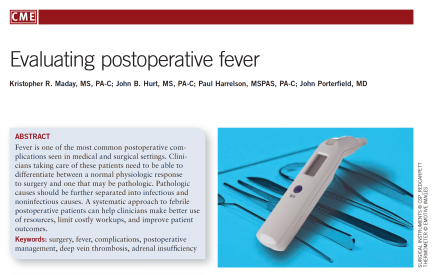 Postoperative fever an elevation of body temperature to ≥ 38.3oC (100.4oF) following major surgical procedures.  The vast majority of postoperative fevers occur within the first 5 days of surgery, which is why the timing of the fever is so important in differentiating the potential causes.

Surgery cause a massive inflammatory cascade due to the physiologic and cellular damage injury.  This is a completely normal homeostatic response, but the release of IL-1, IL-6, and TNF-alpha (to name a few) are all pyrogenic cytokines that can contribute to a febrile response.

These cytokines act on the preoptic area of the hypothalamus to increase prostaglandin E2 secretion and raises the thermostatic endpoint of the body.  This cascade usually peaks at 48 hours and care should be given to prevent costly and unnecessary infectious work-ups.

The Seven W’s of Postop Fever

Atelectasis usually occurs within the first 48 hours due to splinting and incomplete lung expansion secondary to pain following surgery.  It has long been considered the leading cause of postop fever, but has been debunked in the literature for decades now with increased knowledge of the cellular inflammatory cascade.  Decreased breath sounds , SOB, crackles, tachypnea can be indicators for atelectasis and CXR may show dependent, L>R infiltrates.  Treatment should be incentive spirometry and early mobilization to promote expansion.

Urinary tract infections (UTI) are the most common postoperative nosocomial infection secondary to the placement of a urinary catheter for surgery.  Risk factors for postoperative UTI are length of catheterization need, female gender, older age, history of diabetes, and previous history of UTIs.  Signs and symptoms can reveal suprapubic pain, CVA tenderness, flank pain, and malodorous, cloudy urine.  Clean catch sample is ideal, but a clean aspirate from an indwelling catheter may be used.  Urinalysis can provide a quick idea if it is infectious are not, specifically looking for positive nitrites and/or leukocyte esterase, or sending for a urine culture and finding > 105 cfu of the offending organism.  Treatment should be removing the catheter (if possible) and tailoring antibiotic therapy to the organism in question.

Surgical site infections (SSI) generally begin to manifest 3-10 after surgery and risk factors for developing are ASA score of 3-5, contaminated or dirty procedure, or an extended length of surgery.  Signs and symptoms of an SSI are increased pain, redness, and swelling at or near the incision.  These can be superficial skin, deep skin, or deep space and ultrasound can help differentiate between cellulitis and focal infection.  Treatment is either antibiotics (for cellulitis) or drainage (for abscess).

Deep venous thrombosis (DVT) can be common in surgical patient (up to 20%) secondary to immobilization and resistance to move due to pain.  To make matters worse, many can be asymptomatic with the exception of the fever.  The incidence is highest 3-5 days after surgery and you should have a low threshold to order a bilateral lower extremity ultrasound.  Treatment for a DVT following surgery can be tricky due to bleeding risk.

Medications are the most common, noninfectious cause of fever in patients following surgery.  Timing is variable from immediately after administration to hours, or even days, later.  Most cases are due to antibiotics or heparin and result in only a mild, transient febrile response.  There are 3 life-threatening cause of medication induced fevers that you at least need to think of and rule-out:

Up to 50% of adults over the age of 18 admit to regular alcohol consumption and up to 50% of these patients report withdrawal symptoms when abstinent.  Signs and symptoms of acute withdrawal can begin to manifest 6-72 hours after the last ingestion and range in severity from mild, vague symptoms to florid delirium tremens.  Treatment is aggressive benzodiazepine regimens to abate the symptoms, with a gradual taper while in the hospital.

Though rare, two endocrinologic conditions can cause fever in the postoperative period.  Adrenal insufficiency and thyrotoxicosis can both occur due to disruption of the hypothalamic-pituitary-adrenal/thyroid axis by the inflammatory mediated response of surgery.  Coupled with a patient being NPO prior to surgery, a patient may not be able to take their medications to keep these conditions at bay.  Careful preoperative history will identify these patients prior to surgery and recommendations can be made on which medications can be taken the morning of surgery, or what medications can be given in perioperatively.