Definition – Clenched fist held over the sternum while a patient is describing their chest pain and classically is the right hand, as cardiac pain can refer to the left arm.

Clinical Significance – There is very little significance to this sign and has been studied to only have a 14% sensitivity for cardiac chest pain, but is a classic physical exam finding and frequent pimp fodder.

History – Named after Samuel Albert Levine (1891-1966), who was an American cardiologist and attending physician at The Brigham Hospital in Boston, MA, and assistant professor of medicine at Harvard University.  He graduated Harvard at the age of 20 and was the first physician to diagnose President Franklin Roosevelt with poliomyelitis.  He was a pioneer in coronary thrombosis research and was the second physician to ever diagnose the condition, which he described it in his classic book Clinical Heart Disease in 1936. 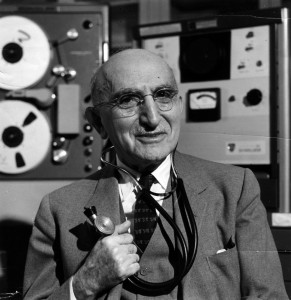 He is also the namesake of The Levine Scale, a 1 to 6 grading system to characterize the intensity  of heart murmurs, and Lown-Ganong-Levine syndrome, which is a pre-excitation syndrome causing a shortened PR interval with normal QRS complexes in tachycardia.