What are the boundaries of Calot’s Triangle and what can be found there?

Calot’s Triangle is the area bordered by:

A lymph node can be found within this triangle and there is apparently great debate about the name of this node.   I had learned this was referred to as Calot’s node (which makes sense, right), but it is more accurately named Lund’s, or Mascagni’s, node.  This node can be enlarged and inflamed with cholecystitis.

The anatomical area is referred to as the cystohepatic triangle and is bordered by:

The reason for this distinction from Calot’s Triangle is because the cystic artery can be found within this region. 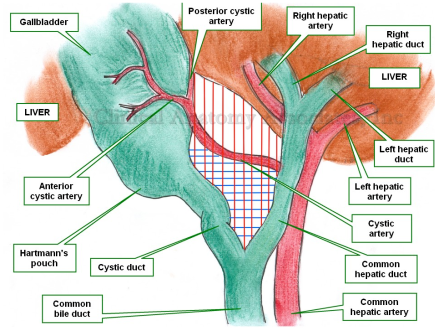